A plug for my brother in law... 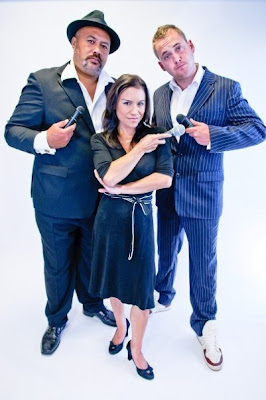 Pete Da Palaga works for our sister station, Flava. That's him there in the stripey suit with his co-hosts Dave Fane and Stacey Morrison. He was cooking sausages outside the Auckland Radionetwork building when a truck who had decided to stop for one of his bangers hit the building.

Pete is also my wife Anna's little brother and that little sausage sizzle made the news tonight.

Here's the video from TVNZ. You can't buy this sort of media attention from a promotion.
Posted by Dave Smart 1 comment: Links to this post

I know I've already posted the John Key video, this audio is a part of that and I've reposted it for a few reasons.

1: The vid was 28 mins and you may have got bored or not bothered with it.
2: It shows how an interview can be used and reused in different ways.
3: It's, in part, talking about the upcoming anti smacking referendum.
4: it's just been posted by our good mates at DIY Father.

It's us vs John Key on the specific subject of being a Dad. I cut this up specifically for the DIY Father Podcasts. I had an excellent meeting with DIY today about some projects I'll be doing with them - watch this space. It's going to be fun. Especially if you have kids.

My Grandad died last week. He wanted to. He’d had enough. He wasn’t well, he missed my Nan who went about 8 years ago and the Emphysema had taken its toll on his body.

I was lucky enough to be raised by my Grandparents. My Mother passed in 1986 after a particularly bad asthma attack. My step father remarried a woman who had kids of her own and they made it clear that there wasn’t a place in that family for me so off I went.

Ray Smart was always in the garage making stuff for us kids and he was first to arrive to help out if something needed doing at anyone else’s house. Being allowed to mow his lawn was a big deal and if he called us by our given names, we were in trouble. He called a spade a spade and you always knew where you stood.

I remember once an old teacher of mine was trying to sell me Amway so he went to the phone, dialed 137 to make it ring, picked it up, had an imaginary conversation with no-one, told me I had to take the call and booted the guy out. He always had his family’s back.

He loved his cars. I remember once crashed the Holden into the corner of the garage, she tried to get it fixed before he got home but somehow he knew what she’d done before he got home. To be allowed to drive Grandad’s car was an honor and a privilege. I crashed his Bluebird when I was 21, it was 8 years until he let me near it again.

He was big on his Sunday drives, whether we were checking out new subdivisions, pointing out houses he’d built years ago, getting ice creams, whitebait or mushrooms. Grandad had an uncanny ability to spot a mushroom 3 fields over and thought nothing of stopping the car, climbing 3 fences and walking a mile to get it. He didn’t give a stuff whose field it was, those mushrooms were coming home with us.

Last Friday, I was quietly clearing out his room at his retirement village and all the staff wanted to stop me and say how fond of him they were.

I truly believe that going into care added almost another 2 years onto his life. He was warm, fed and he had company. He had cups of tea whenever he wanted it and his secret supply of beer as well. He gave as good as he got with the nurses and loved it when they gave it back. He decided to name one of the staff 4 foot 11. That was his name for her. She swears she’s 5 foot tall but he wouldn’t have a bar of it. I overheard one of the inmates telling a staff member how much quieter it was without him puffing away, she said she missed it.

For as long as I can remember, the first thing my Grandfather did when he got the paper each day was check the death notices to see if he was still alive.

He’s finally made it in there and he’s now back together with Nan.
Posted by Dave Smart 9 comments: Links to this post 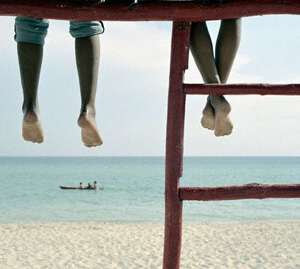 Time to rest, recuperate and generally not think about work.
Ok, so the first two aren't true. There is no resting with a 3 year old and a 1 year old and we're moving house so we'll actually probably be freakin' busy.
As for the third, much to the annoyance of my loved ones, I'm guilty as hell of seeing something on holiday and thinking, 'we could talk about that in the show.'

So, back on July 20 with a whole bunch of stuff that I've tried not to think about.
Posted by Dave Smart 1 comment: Links to this post