I have maximum respect for parents who have children with special needs. They, (and the kids themselves) show strength and bravery that the rest of us simply cannot comprehend until we get a taste of it.

Yesterday, Jojo was messing about at the dinner table. He’d finished but as is the rule in most families, he was required to wait until everyone else had finished their dinner before getting down. This, for a two year old is the most boring thing in the world so he stood up on his chair. No sooner had we said, “Sit down, Jojo...” He had toppled off his chair and landed on the wooden floor.

He did that delayed cry thing and Anna – call it mother’s instinct, knew that this wasn’t any of his normal crashes. His elbow was swollen, that was clear already so it was off to the Medical Centre. The Doctor took one look, said, “X-Ray time! Here’s a letter, off to the hospital.”

(Insert quick call to my mate Ryan to tell him that we now weren’t going to see the A-Team movie...)

With 3 kids, the other two must be looked after so Anna and Jojo were left at the hospital and I took the daughters home to bed.

Meanwhile at the hospital, we learnt that Jojo has broken his elbow and because the end of the elbow isn’t fully formed in a two-year-old, he needs surgery and wires placed in there.

He’s in having the surgery right now, his Mum is pacing round the hospital, I’m writing this, Sophie’s watching Kidzone and Emily’s asleep.

The hardest thing about this is the thought of my son’s perfect skin being cut to do the surgery. However, it’s only his arm and it’s a common procedure, and, back to my original point, nothing compared to what other parents have to go through.

Here's Mr Jobot, or Jojocop. NOT impressed. But, so, so incredibly brave. 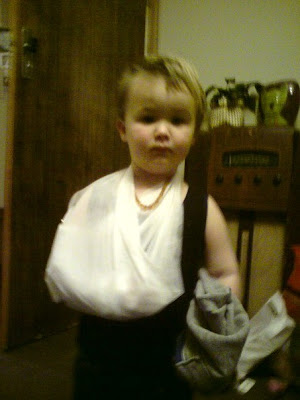 Officially, this was my wife’s idea but the execution is definitely Dad business.

We simply drew up a shopping list for each child with pictures of what they needed to find.

Each kid, armed with their list was sent on a treasure hunt with Dad close behind, making sure they got the right brands and most importantly, what was on special.

Dad and kids had a ball with the excitement of the hunt and high fives all round when an item was found and Mum got to shop in peace.

Highlights include Joe struggling with a 3 litre bottle of milk that no-one was allowed to help with and it didn’t matter that Sophie dented the butter when she threw it in the trolley.

Here’s Team Smart at Pak n’ Save today, Joseph was very excited to find his cat food. Next week, Sophie wants cat food on her list.