By reading Facebook and Twitter feeds, one could be forgiven for wondering if the death of Amy Winehouse means more to people that what has happened in Norway.

Both were a day apart, a world away, and both involved death of young people. Death, before it was naturally expected.

One was on a massive scale. Cruel, calculated, perhaps almost unfathomable. Beyond comprehension. Maybe that’s why it doesn’t seem to resonate as much with some as one that was unsurprising, singular, yet possessing something infinitely more powerful.

Is it simply that we recognise her? We know her voice and have connected with her songs, and the people in Norway are as yet faceless, and even after we hear their names, will continue, for those of us on this side of the world continue to be, mostly nameless?

Or maybe it’s because we, as human beings, can handle and understand the death of one, yet we’re not equipped to deal with the atrocity of mass murder.

Perhaps we’re not built like that. We shut out the horror because if we let it in, it would scar us too deeply.

Maybe that’s a good thing. One person taking that many lives should not be easily processed. We shouldn’t be surprised if people close their eyes and try not to feel it. If we could handle it, then death on that scale would have to be commonplace – a terrible thing. We would, in turn be a much colder and harder species.

Both are tragedies. An incredible waste. I just hope that the people who are pouring out melancholy of the death of Amy Winehouse are at least as equally saddened by what has happened in Norway.

The death of one famous person should absolutely not eclipse the death of 92 (at time of writing) people who are not famous. That number which may or may not include a New Zealander. 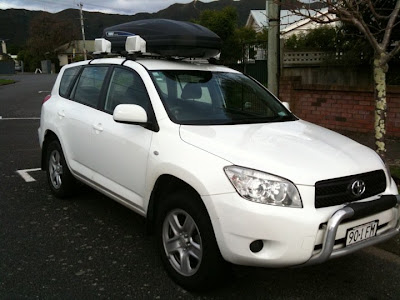 After 3 and a half years and nearly 56,000k, we're getting ready to farewell the Classic Hits car. We've thrown signs, kids, wet clothes, lollipops by the thousand, speakers, wires, amplifiers and all sorts through this car and it's barely missed a beat.
There's still a few jobs left for it to do, and we have to remove the broadcast gear out of the back and the speaker kits of the roof and then in a couple of weeks, it will disappear from our lives and be replaced by something pretty much exactly the same.

The unnamed person who forgot their was a roofbox and tried to take the car into a parking building. (NOT me, but repaired by me..)
The stench of what we think may have been milk or something equally rank spilt. (Again, not me, sorted out by the groomers..)
The fender scrape. (May have been me, but I don't remember...)

Farewell, little car, we hope your new owner enjoys you as much as we have. And if you end up buying a white 4 year old RAV4 in the near future, don't be surprised if you find a lollipop or ten under the seat.
Posted by Dave Smart No comments:

Doing my bit for the environment

There are many endangered species in New Zealand. The Little Spotted Kiwi, the Kakapo, the Harlequin Gecko and most of the residents of Zealandia. These little battlers have wonderful people working hard to bring them back to sustainable numbers and they deserve all success..

Regrettably, no one seems to be working on the dwindling useful length of modern vacuum cleaner cords.

We’ve all been there. The vac is plugged in somewhere down the hall, we’re in the bedroom, sucking up a storm round the end of the bed and heading toward the bedside table and we come to the end of the line.

Depending on how vigorously we’re hoovering, one of several things might happen. We could suddenly not be able to go any further, meaning a trip back down the length of the cord see if it’s jammed on anything, then to remove the plug and seek out a closer powerpoint. We could, if we’re really getting into it, pull the thing clean out of the wall and have to go back, and replug, or we could, and this is the most dangerous of all, pull the plug half out of the wall, necessitating the kicking of the plug to knock it completely out whilst simultaneously jumping back for fear of getting zapped.

We could even take it a step further. The remote control detached itself from the telly in the 80s, we got wireless internet in the 2000s, we have electric cars now, how hard is it to go cordless vac? I’m talking way more powerful than the dustbuster. I’m thinking about a full size 2000 watt bagless, cordless, uber vac. Hell, make it petrol powered so we can park it out in the shed next to the mower. Men would be far more likely to clean if the equipment had a pull start and an exhaust pipe.

If that’s too hard, just another 2 metres on the cord would do the trick. Anything more would be overkill, anything less, pointless.
Posted by Dave Smart No comments: